I’m excited to report that earlier this month, I ran the second wave of data collection for our Sharing Networks research project at OuiShare Fest 2017!

To understand how people form and reinforce face-to-face network ties at such an event, I fielded a questionnaire with the help of a committed and effective team of co-researchers. It is a “name generator” asking respondents to name those they knew before the OuiShare Fest, and met again  there (“old frields”); and those they met during the event for the first time (“new contacts”). Participants then have to choose those among their “old” and “new” contacts, that they would like to contact again in future for joint projects or collaborations.

Interestingly, my good old pen-and-paper questionnaire still gives a lot of insight that digital data from social media cannot provide – just like a highly computer literate community such as this feels the need to meet physically in one place every year for a few days. Like trade fairs that flourish even more in the internet era, the OuiShare Fest gathers more participants at each edition. They meet in person there, which is why they are to be invited to respond in person too.

END_OF_DOCUMENT_TOKEN_TO_BE_REPLACED

Substantive as well as epistemological / methodological contributions are welcome. We are particularly interested in proposals that examine the social effects and/or the scientific implications of big data based on first-hand experience in the field.

The deadline for submission of extended abstracts is 28 February 2017; for full contributions, it is 15 September 2017. Revue Française de Sociologie accepts articles in French or English.

Further details and guidelines for submission are in the call for papers.

The journal Sociological Research Online has just published (31 May 2016) a special section on “Visualization in Mixed-Methods Research on Social Networks”, guest edited by Alessio D’Angelo, Louise Ryan and myself.

The five papers in this peer-reviewed special issue explore the potential of visual tools to accompany qualitative and mixed-methods research. Visualization can support data collection, analysis and presentation of results; it can be used for personal or complete networks; it can be paper-and-pencil or computer-based. Overall, visualization helps to jointly understand network contents and network structures.

The special issue is freely accessible from all commercial (non-academic) internet providers.

END_OF_DOCUMENT_TOKEN_TO_BE_REPLACED

A new, master’s level programme of study in Survey and Data Science is to be offered jointly by the University of Mannheim, the University of Maryland, the University of Michigan, and Westat. Applications for the first delivery are accepted until 3 January, for a start in Spring 2016. Prospective students are professionals with a first degree, at least one year of work experience, and some background in statistics or applied mathematics. All courses are delivered in English, fully online, to small classes (it’s not a MOOC!). Tuition is free, thank to support from German public funds at least for the first few cohorts.

What is most interesting about this master is its twofold core, involving both more classical survey methodology and today’s trendy data science. Fundamental changes in the nature of data, their availability, the way in which they are collected, integrated, and disseminated, have found many professionals unprepared. These changes are partly due to “big” data from the internet and digital devices becoming increasingly predominant relative to “small” data from surveys. Big data offer the benefit of fast, low-cost access to an unprecedented wealth of informational resources, but also bring challenges as these are “found” rather than “designed” data: less structured, less representative, less well documented (if at all…). In part, these changes are also due to the world of surveys changing internally, with new technical challenges (regarding for example data preservation, in a world of pre-programmed digital obsolescence), legislative issues (such as those triggered by greater awareness of privacy protection), increased demand by multiple users, and a growing need to merge surveys and data from other (such as business and administrative) sources. It is therefore necessary, as the promoters of this new study programme rightly recognize, to prepare students for the challenges of working both with designed data from surveys and with big data.

It will be interesting to see how data science, statistics, and social science / survey methodology feed into each other and support each other (or fail to do so…). There is still work to be done to develop techniques for analyzing data that allow us to gain insights more thoroughly, not just more quickly, and help us develop solid theories, rather than just uncovering new relationships that might eventually turn out to be spurious.

Uh, it’s been a while… I should have written more regularly! All the more so as many things have happened this month, not least the publication of our book on the End-of-Privacy hypothesis. Well, I promise, I’ll catch up!

Meanwhile, a short update from St Pete Beach, FL, where the XXXIV Sunbelt conference is just about to end. This is the annual conference of the International Network for Social Network Analysis and in the last few years, I noticed some sort of tension between the (let’s call it like that — no offense!) old-school of people using data from classical sources such as surveys and fieldwork, and big data people, usually from computer science departments and very disconnected from the core of top social network analysts, mostly from the social sciences. This year, though, this tension was much less apparent, or at least I did not find it so overwhelming. There weren’t many sessions on big data this time, but a lot of progress with the old school — which in fact is renewing its range of methods and tools very fast. No more tiny descriptives of small datasets as was the case in the early days of social network analysis, but ever more powerful statistical tools allowing statistical inference (very difficult with network data — I’ll go back to that in some future post), hypothesis testing, very advanced forms of regression and survival analysis. In this sense, a highly interesting conference indeed.  We can now do theory-building and modeling of networks at a level never experienced before, and we don’t even need big data to do so.

The keynote speech by Jeff Johnson, interestingly, was focused on the contrast between big and small data. Johnson has strong ethnographic experience with small data, including in very exotic settings such as scientific research labs at the South Pole and fisheries in Alaska. He combined social network analysis techniques, sometimes using highly sophisticated mathematical tools, with fieldwork observation to gain insight into, among other things, the emergence of informal roles in communities. His key question here was, can we bring ethnographic knowing to big data? And how can we do so?

My own presentation (apart from a one-day workshop I offered on the first day, where I taught the basis of social network analysis) took place this afternoon. I realize, and I am pleased to report, that it was in line with the small-data-but-sophisticated-modeling mood of the conference. It is a work derived from our research project Anamia, using data from an online survey of persons with eating disorders to understand how the body image disturbances that affect them are related to the structure of their social networks. The data were small, because they were collected as part of a questionnaire; but the survey technique used was advanced, and the modeling strategy is quite complex. For those who are interested in the results, our slides are here:

We have just published the results of our research project ANAMIA, studying the personal networks and online interactions of persons with eating disorders (“ana” and “mia” in web jargon). The report has just come out:

Infographic: results and recommendations of the ANAMIA project (pdf, in French)

The ana-mia webosphere had remained opaque for long, with little data available for a science-based understanding of it. As a result, misconceptions proliferated and policy-makers hesitated — threatening censorship but without devising solutions to reach out and support a population in distress. Our study has been the first to overcome these limitations and reveal the social environment, actual eating practices and digital usages of persons with eating disorders in the English and French web. 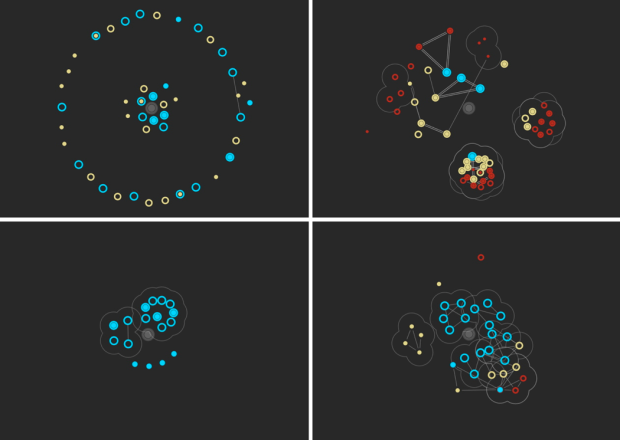